The Fritz London Memorial Prize, established in 1957, is an international prize awarded once every three years which is intended to recognise outstanding experimental and theoretical contributions to low temperature physics. The prize commemorates the research of Fritz London, a pioneer in the early development of Superconductivity. His brother, Heinz London, worked closely with Sir Martin Wood on the first commercialisation of the dilution refrigerator in 1966. The prize is administered by Duke University, North Carolina. We have sponsored the Fritz London Memorial Prize since 1996.

Sauls, Halperin and Parpia are awarded the prize for their outstanding contribution to the study and understanding of the role of confinement and disorder in superfluid 3He.

The winners of the Fritz London Memorial Prize have been presented with their prizes at the International Conference on Low Temperature Physics, LT28 in Gothenburg, Sweden in August 2017 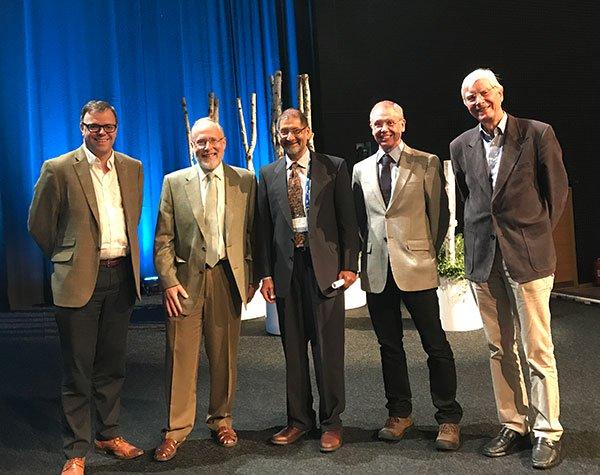 The Fritz London Prize was created to recognize scientists who made outstanding contributions to the advances of the field of Low Temperature Physics. It is traditionally awarded in the first session of the International Low Temperature Conference, which is sponsored by the IUPAP (International Union of Pure and Applied Physics) and was first awarded in 1957. The bylaws presently used by the Fritz London Prize committee were drafted in 1972 by John Bardeen, winner of two Nobel Prizes and of the '62 F. London Prize, and have been subsequently brought up to date. A Charter of the Fritz London Prize has been drafted, and the present trustees are D. Gauthier, D.G. Haase and M.H.W. Chan. The Advisory Board members are: A. Goldman, M. Krusius, W. Ketterle, A. Ikushima, M.N. Cuthbert and G. Frossati.

The London Prize was first funded by grants from the A.D. Little Company that made the Collins helium liquefiers. The funding on a regular basis dates back to 1972 when John Bardeen gave his portion of the Nobel Prize to Duke University for an endowment, called "the Fritz London Fund".This was to provide support for the annual Fritz London lecture and for the London Memorial Prize, to be awarded at each international LT meeting. In 1994, a second endowment was created at Duke University from a) the balance of funds remaining from the LT20 Conference in Oregon, remitted by Russell Donnelly, and b) a gift from Horst Meyer. This second endowment is called "Fritz London Prize endowment" and is solely intended for the London Prize. Further gifts to this endowment were made in 2000, 2006, 2009 and 2012 by the Organizers of the LT22, LT24, LT25 and LT26 Conferences in Helsinki, Finland, Orlando ,Florida, USA. Amsterdam, The Netherlands, and Beijing China.