Dr Ross is recognized for her research towards elucidation of exotic magnetic ground states and ground state selection in quantum frustrated magnets, using neutron scattering techniques at low temperatures and in high magnetic fields. The LOR Science Prize selection committee was very pleased to recognize the comprehensive nature of the studies led by a young scientist like Dr Ross, who is both very accomplished and also has had impact in the field of quantum and frustrated magnetism.

"It truly is an honour to be the recipient of this award. Exploring quantum magnetic phenomena in materials has been a difficult, exciting, and diverse subject. I am particularly lucky that I have had many great collaborators, and work within a supportive community. It’s a great honour to receive the Lee Osheroff Richardson Science Prize recognizing this work", commented Dr Ross.

Kate Ross has championed a remarkable body of experimental work that established what we know about a set of quantum frustrated pyrochlore magnets. During her PhD at McMaster University, she grew large single crystals of rare earth titanate pyrochlores, appropriate for neutron scattering measurements, and carried out sophisticated time-of-flight neutron scattering measurements at dilution refrigerator temperatures, and in magnetic fields up to 8 T. This single crystal, inelastic neutron scattering work, carried out from 2008 to 2012, was among the first to fully characterize a four dimensional data set of S(Q, E) (three Q dimensions, one energy dimension) to fit the high magnetic field spin excitation spectrum to linear spin wave theory.

Kate also played a key leadership role in both the experiments and the manipulation of the data sets in a program of neutron and x-ray diffraction measurements in very high, pulsed magnetic fields. These challenging experiments were carried out in a collaboration between the McMaster group and Hiroyuki Nojiri (Tohoku University), Garrett Granroth (ORNL) and Zahir Islam (ANL). The work resulted in two Phys. Rev. Letts. and instrument development papers and resulted in Kate giving two invited talks on the work.

Her topical body of work has attracted much international interest and significant recognitions. Five years past her PhD, she has 37 lifetime publications and an h-index of 21 (Google Scholar). She was awarded the 2017 George Valley Jr. Prize from the American Physical Society for outstanding early career contributions in any area of physics, the first female physicist to be recognized. Earlier, she was awarded the 2014 Alice Wilson Award from the Royal Society of Canada for early career excellence by a Canadian female scientist in any area of science. In 2016, Kate was appointed to a CIfAR Azrieli Global Scholar within the Quantum Materials Program.

Brief of her publications:

1) K.A. Ross, L. Savary, B. D. Gaulin, and L. Balents. Quantum Excitations in Quantum Spin Ice. Phys. Rev. X 1, 021002 (2011). 255 citations (Google Scholar)
This paper provided quantitative exchange interactions within an anisotropic exchange model for the pyrochlore material Yb2Ti2O7. These were extracted by fitting the field-polarized spin wave excitations measured my neutron scattering, at T = 50 mK and μ0H = 5T. The extracted parameters suggested that Yb2Ti2O7 is close to a new phase of matter called “quantum spin ice”, which is predicted to host “emergent electrodynamics”, i.e. quasiparticles that can be identified as spin-based magnetic monopoles, electrons, and photons. This paper spurred accelerated interest in the material and in other quantum spin ice candidates, and in general the anisotropic superexchange model that we now know accurately captures the physics of many rare earth pyrochlores. Kate took the lead on growing the single crystal for the measurement, was one of the main experimenters for the neutron beam time, performed the fits to the field polarized spin waves to extract the exchange parameters, and helped to write the paper.

2) K.A. Ross, T Proffen, H.A. Dabkowska, J.A. Quilliam, L.R. Yaraskavitch, J.B. Kycia, B.D. Gaulin. Lightly stuffed pyrochlore structure of single-crystalline Yb2Ti2O7 grown by the optical floating zone technique. Phys. Rev. B 86 (17), 174424 (2012). 92 citations (Google Scholar)
This influential paper examines origin of the known sample-dependence of the magnetic properties of Yb2Ti2O7, which was investigated through a careful structural study. Neutron powder diffraction results from a crushed single crystal and a pristine powder sample, which each display representative magnetic behavior of the variety of low temperature specific heat observed from Yb2Ti2O7, revealed that the single crystals are “stuffed” with extra Yb on the non-magnetic Ti sublattice, while the powders are stoichiometric and thus more closely representative of the ideal behavior of Yb2Ti2O7. This work led to many follow up studies from other groups, confirming and adding to this structural defect picture, and eventually helped to inspire a crystal growth method that appears to have produced unstuffed Yb2Ti2O7 crystals, which should enable a clearer view of the exotic magnetic state of Yb2Ti2O7. Kate led this work, producing the samples, performing the experiments, analyzing the results, and writing the manuscript.

3) K. A. Ross, Y. Qiu, J. R. D. Copley, H. A. Dabkowska, B. D. Gaulin. Order by Disorder Spin Wave Gap in the XY Pyrochlore Magnet Er2Ti2O7. Phys. Rev. Lett. 112, 057201 (2014). 47 citations (Google Scholar)
This paper reports the presence of a small energy gap to the spin wave excitations in the XY antiferromagnetic pyrochlore material Er2Ti2O7. This compound had been previously theorized (based on a field polarized neutron scattering study similar to that in paper 1 above) to be one of the rare material examples where “order by disorder” (i.e., fluctuations) selects the magnetically ordered ground state. However, previous studies had seemed somewhat contradictory to this, since the spin waves appeared to be gapless to within the energy resolution previously used. The measurement reported in this paper was challenging, pushing the neutron instrumentation to its resolution limit, but clearly revealed the presence of a small gap (0.02 meV). The origin of this gap has been debated since then, with competing theories about the mechanism for ground state selection – a healthy debate that has led to more interesting work on Er2Ti2O7 and other XY antiferromagnetic pyrochlores. Kate performed the neutron scattering experiment, analyzed the data, and took the lead on writing the paper. 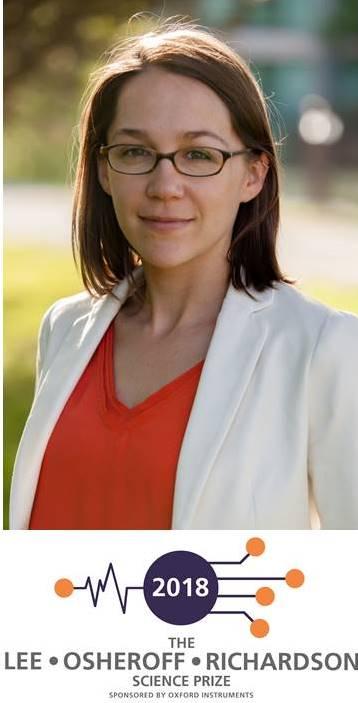